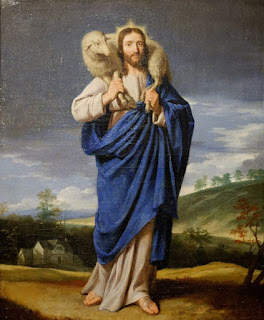 Little by little we are getting close to the Holy Week, and the readings are preparing us for that. Our goal is the resurrection and that's why Easter is the most important feast of our Christian faith. However, we are also experiencing, just as Jesus did, the hard reality of evil.

Today's readings talk to us about this threat, especially coming towards Jesus and to all the innocent people that he represents. The evil described here is from the malice of people who don't bear the goodness of others. This was also the root of the persecution that Jesus had to pass through.

But there is also another sort of evil, which is what we are seeing in our world now. We can interpret that as the nature that is rebelling, as a consequence of so many bad things we have done. It's not only a matter of chemical pollution. We have contaminated the world in a much deeper way. Maybe we don't think about this so often, but we are all closely connected, forming the only Body of Christ.

Any sin we do, both small and great, either seen by others or not, affects the whole humanity in ways that we can't even imagine. God doesn't send any evil, but he won't prevent us from taking responsibility for our own actions and its consequences. Jesus was killed by the malice of concrete persons. That wasn't the plan that God has from the beginning, but his power transformed everything into good.

In this Lent we are experiencing the strength of evil, but the Lord keeps his promise of leading us towards the resurrection. It's a mystery that we can't understand until the end, but it's certain that everything is in God's hands as well. Today's Gospel emphasizes: "They would have arrested him then, but because his time had not yet come no one laid a hand on him." Jesus died in only the hour when he was meant to. And then he rose again. Even though evil can look and actually be very strong, God is infinitely more powerful. That's why we are all praying more than ever, as the Holy Father is inviting us to do in so many different ways.

The godless say to themselves, with their misguided reasoning:

Our life is short and dreary,

nor is there any relief when mans end comes,

nor is anyone known who can give release from Hades.

Let us lie in wait for the virtuous man, since he annoys us

and opposes our way of life,

reproaches us for our breaches of the law

and accuses us of playing false to our upbringing.

He claims to have knowledge of God,

and calls himself a son of the Lord.

Before us he stands, a reproof to our way of thinking,

the very sight of him weighs our spirits down;

his way of life is not like other mens,

the paths he treads are unfamiliar.

In his opinion we are counterfeit;

he holds aloof from our doings as though from filth;

he proclaims the final end of the virtuous as happy

and boasts of having God for his father.

Let us see if what he says is true,

let us observe what kind of end he himself will have.

If the virtuous man is Gods son, God will take his part

and rescue him from the clutches of his enemies.

Let us test him with cruelty and with torture,

and thus explore this gentleness of his

and put his endurance to the proof.

Let us condemn him to a shameful death

since he will be looked after we have his word for it.

This is the way they reason, but they are misled,

their malice makes them blind.

They do not know the hidden things of God,

they have no hope that holiness will be rewarded,

they can see no reward for blameless souls.

The Lord turns his face against the wicked

to destroy their remembrance from the earth.

They call and the Lord hears

and rescues them in all their distress.

The Lord is close to the broken-hearted;

those whose spirit is crushed he will save.

Many are the trials of the just man

but from them all the Lord will rescue him.

He will keep guard over all his bones,

not one of his bones shall be broken.

The Lord ransoms the souls of his servants.

Those who hide in him shall not be condemned.

They would have arrested him, but his time had not yet come

Jesus stayed in Galilee; he could not stay in Judaea, because the Jews were out to kill him.

As the Jewish feast of Tabernacles drew near, after his brothers had left for the festival, he went up as well, but quite privately, without drawing attention to himself. Meanwhile some of the people of Jerusalem were saying, Isnt this the man they want to kill? And here he is, speaking freely, and they have nothing to say to him! Can it be true the authorities have made up their minds that he is the Christ? Yet we all know where he comes from, but when the Christ appears no one will know where he comes from.

Then, as Jesus taught in the Temple, he cried out:

Yes, you know me

and you know where I came from.

Yet I have not come of myself:

no, there is one who sent me

and I really come from him,

and you do not know him,

but I know him because I have come from him

and it was he who sent me.

They would have arrested him then, but because his time had not yet come no one laid a hand on him.
Labels: Fr Daniele homilies lent