Skip to main content
Labels
Posted by Parish Office May 08, 2020 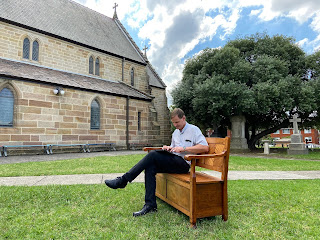 Hi everyone, and Happy Mother's Day to all our parishioners and subscribers. Lovely to be able to celebrate this beautiful day and as a Church, as the wonderful Catholic Mothers you are, raising your kids to experience the maternal love of Christ through them. I want you to know just how much we appreciate this vital vocation of yours and support you on this journey together!

Happy Mother's Day as well to another very special Mum, not exactly within the physical boundaries of our Parish but with us in spirit this weekend, of the Steindler family who have joined us from Wichita Kansas in the USA. Her name is Sierra, and her photo and the photo of her family is also on our pews right now. She sent us all an email this week, saying that they have temporarily joined our online celebrations over the last three weeks as their local Catholic Church, St. Francis Assisi is presently closed due to the COVID - 19 crisis. They normally attend Mass on Saturday night at 7 pm, which happens to coincide with our live streamed 10 am Mass at SCB Ryde on the other side of the world. How's that for a delightful surprise? So, a big welcome to the Steindlers: Chris and Sierra, and their four boys Cooper, Cole, Corey and Clayton!

On another note, it was a big week last week for me, but I got through all the studies better than expected. Thanks to the 147 of you who, as volunteers of our Parish in our ministries and ancillary services, gave me such fantastic support by filling in that questionnaire we sent you about your motivations for volunteering at RGCP.


In terms of the assignment, it actually got me full marks! However, in terms of the parish, it gave me real joy, insights and ideas for the future, seeing your responses and noting your ‘other' motivations. These were the ones I was really interested in!


You see, the ten basic motivations noted there were from a study done last year, which recognised that retaining volunteers in charitable organisations is not that easy. You may be edified to realise that, in that study, 357 volunteers from 14 publicly commended ‘Not For Profit’ organisations (NFPs) were surveyed, and the average time volunteers had spent with these organisations was just 2.1 years. In the case of the 147 volunteers who completed the survey at RGCP (including quite a few who were only just beginning at the Parish), it was a whopping 16 years of service on average. You guys are officially amazing! That says a lot about you, about your commitment and dedication to the Parish, and about the leadership you’ve had over the past 50 years or so. This is something I have inherited from them and you and for which I am very grateful.


The other study I mentioned also sought to rank motivations of volunteers, to see which ones mattered the most from the perspective of the volunteers themselves. In comparison, the results from our own intrepid volunteers showed they scored consistently higher than the averages in that other study in virtually every category of motivation that was more ‘other centred’, what we call 'altruistic', and consistently lower in those categories of motivation that were more ‘me centred', or for personal reasons of satisfaction and development.


What was even more heartening, however, were the ‘other motivations’ you gave in addition to the ten provided. About a third of you highlighted 'faith/God/Church/Christ's mission' as a principal motivation, which was deliberately not included in the other factors as I wanted to have something from you to compare with the earlier study, so as to give a bit of objectivity as to how you are doing in comparison with those other '14 successful and publicly commended' NFPs.

It is a factor that is often overlooked, in the secular world we live in, how important the double commandment of “loving the Lord our God with all our heart, mind, soul and body” and “love your neighbour as yourself”, conveniently combined in the one commandment Jesus gave us, to “love one another as I have loved you”, is to us. It is probably the greatest motivation we have to volunteer our services in the Parish and it is also the main reason for giving my life to God and to the Church as well. That was gold. Incidentally, the professor said that the study we did was very well done. Much of that is thanks to all of you, your contributions, and your willingness to help out, so you should feel very proud of yourselves and of all you are doing as volunteers with our Parish.


In future weeks I would like to extend the survey to include a lot more motivations that were not cited, and that many of you very kindly recognised in the comments that you gave. One of you did seem a bit offended that I had kept the “I volunteer at RGCP because of the financial or other little benefits I get (coffee, travel) etc”. I was actually glad you did say that! It was included simply as a comparison with the other study, not because I believed it to be a significant motivation for our RGCP volunteers!


What this highlighted, overall, is that RGCP's volunteers are a happy bunch of altruistically motivated people, who have remained faithful to that work over many many years and that are continuing to make a huge difference to the lives of people around them. And that is just great...

And I will leave it at that for now. Have a beautiful Mother's Day and God bless all of you in this wonderful vocation.

Your brother in Christ's service,